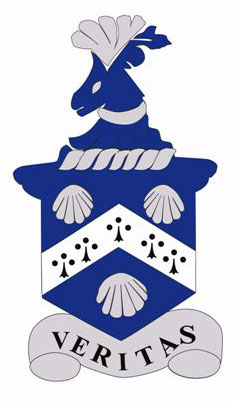 The Townsend family lived in Townsend Fold from the 1600's onwards and they owned property and cotton mills, land in Waterfoot (Townsend ST) is named after them. Their main residence was The Holme, which was a mansion demolished in the early 1960's but up to the 1950's the Townsend family still lived there.

There are photos (see images below) of The Holme, which had a beautiful fountain outside, there are photos of Townsend Fold all taken around a hundred years ago, possibly 120 years ago. There are photos looking toward the Manor and you can see the remains of a huge gate which was a toll gate across Holme Lane, the Townsends collected a toll, there is a photo of a Townsend family wedding, a carriage outside The Holme and bride gong in, maybe from wedding of Edith Mary Townsend to George Turner Hardman (grandson of William Turner , Helmshore). There are old photographs on display at Holme Manor which are very interesting for anyone caring to look.

The two Townsend brothers who built the newer part of Holme Manor, which was Holme Farm, were Jonathan and Richard Townsend, There are two date stones at the Manor which bear their initials and the date of 1828. Jonathan was born in 1781 and died in 1856, he is described as a landowning gentleman of The Holme. Richard was born in 1796 and died in 1860, he was described as a farmer.One of the datestones is a keystone in teh arch of what must have been the barn door opening of the building which now faces the conservatory.

Both brothers are buried together at St James in Haslingden, their tombstone is belived to be the single largest gravestone in England measuring 14 feet by 5 feet, this massive stone is supported by stone columns upon two of which are carved the Townsend family coat of arms which is reproduced elsewhere on this site. The family tree shows that many of the Townsends joined forces with other mill owning families and they were evidently following the tradition common at the time. Our Richard's son, also Richard managed Higher Mill at Helmshore from 1855 to 1876, his brother John was a colliery proprietor (Townsend, Barlow and Hargreaves of Bacup). 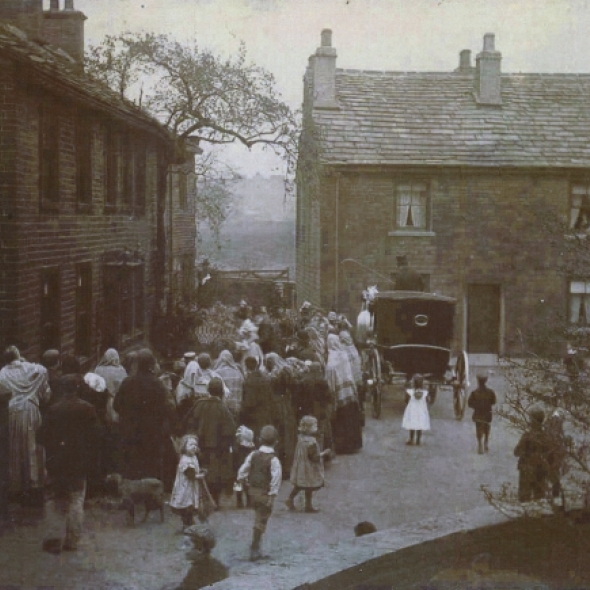 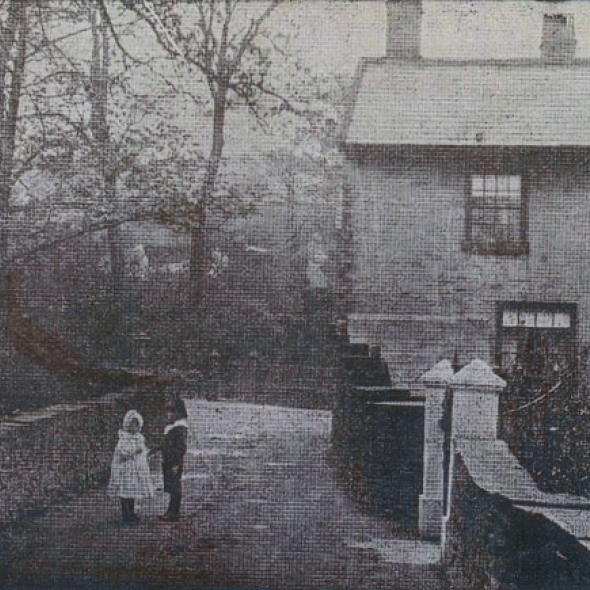 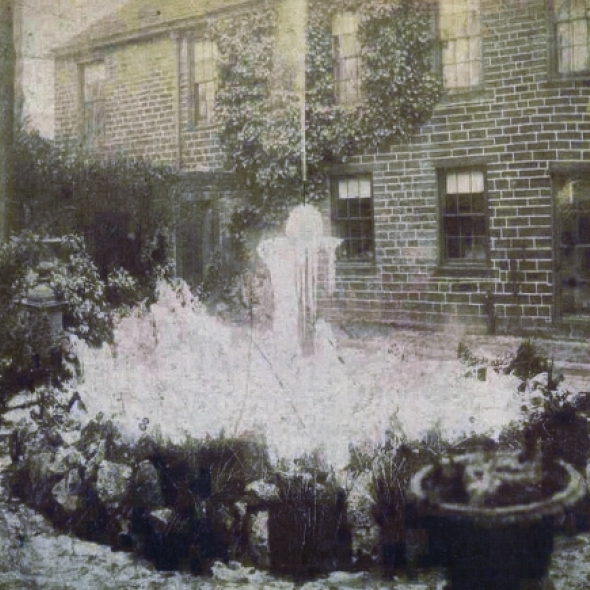 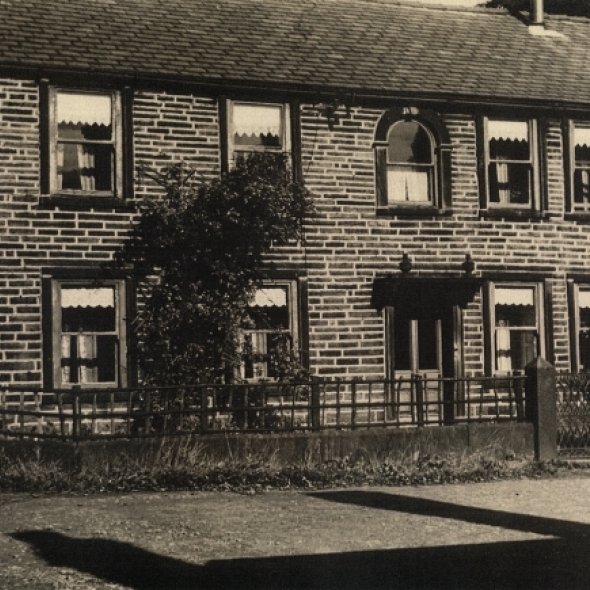 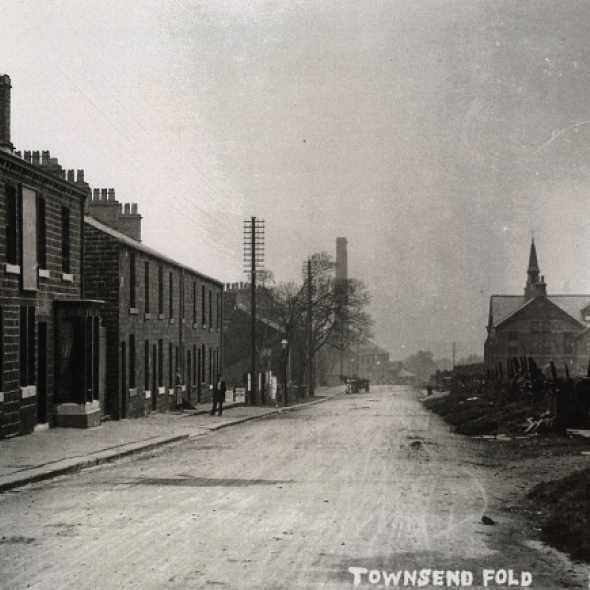 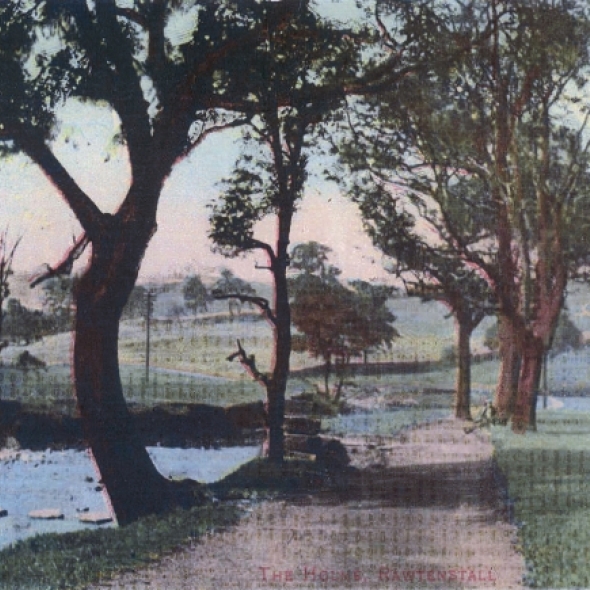 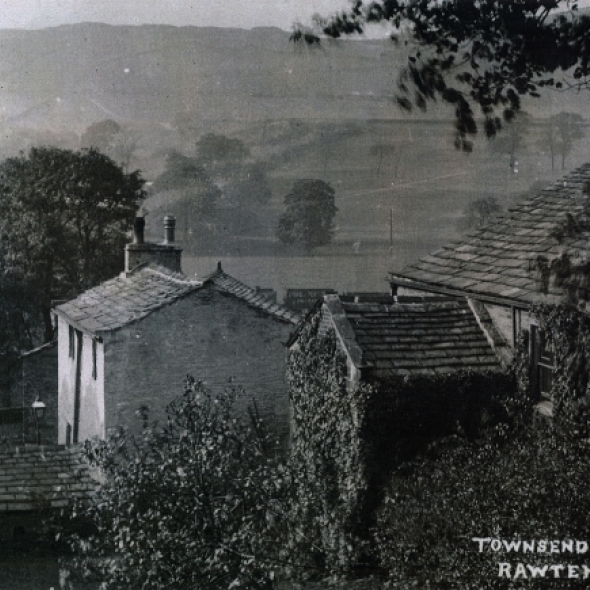 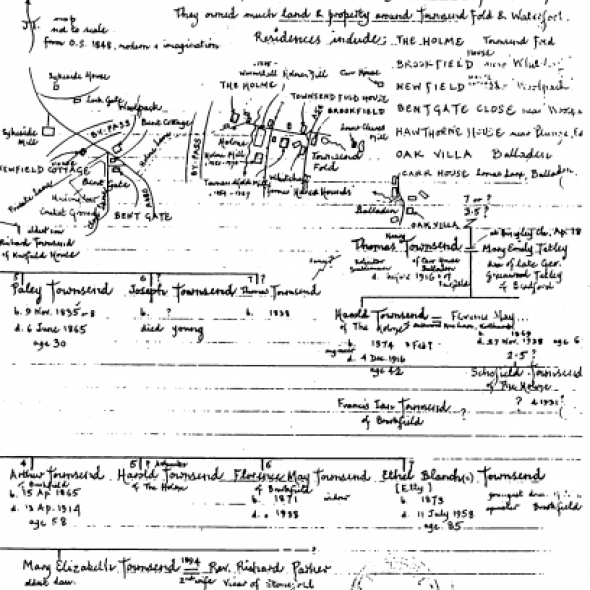 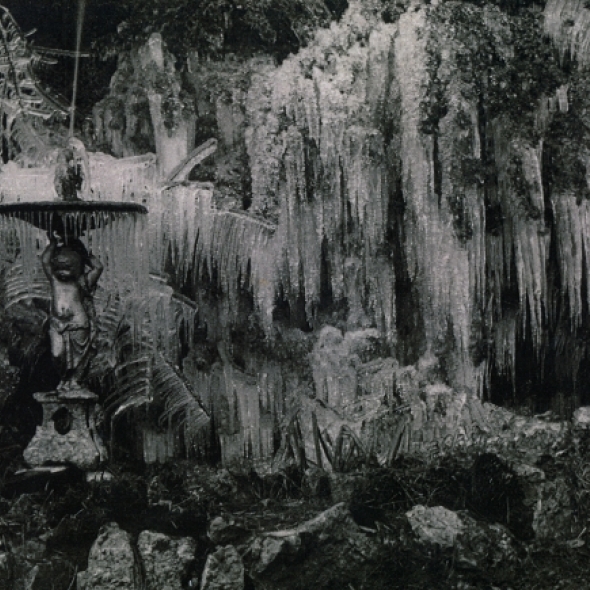 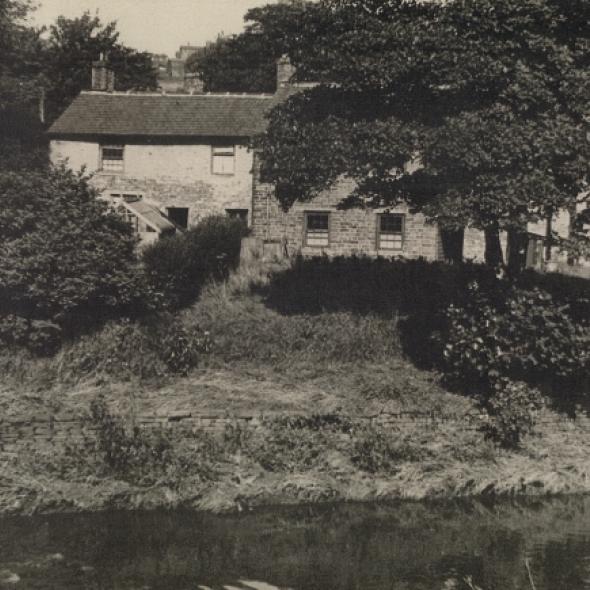 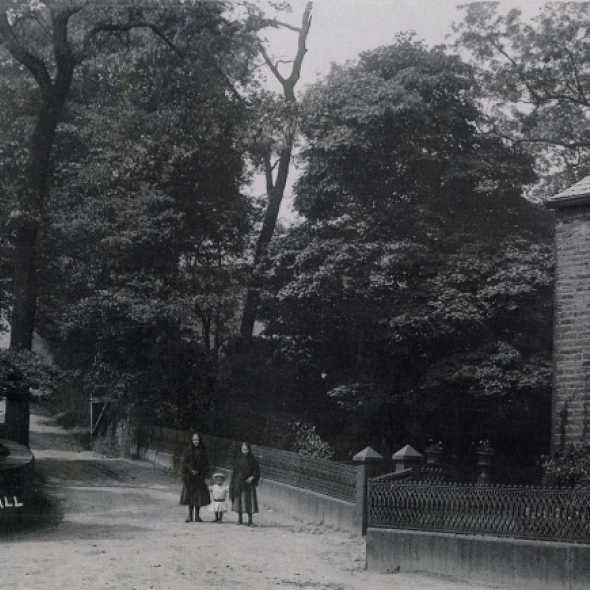 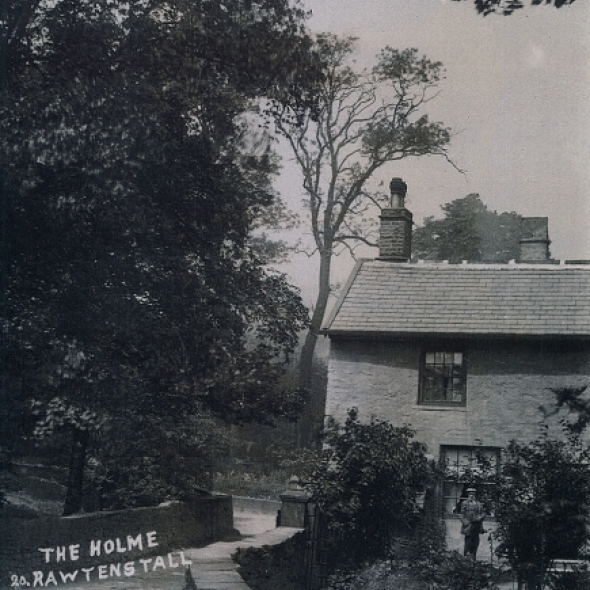 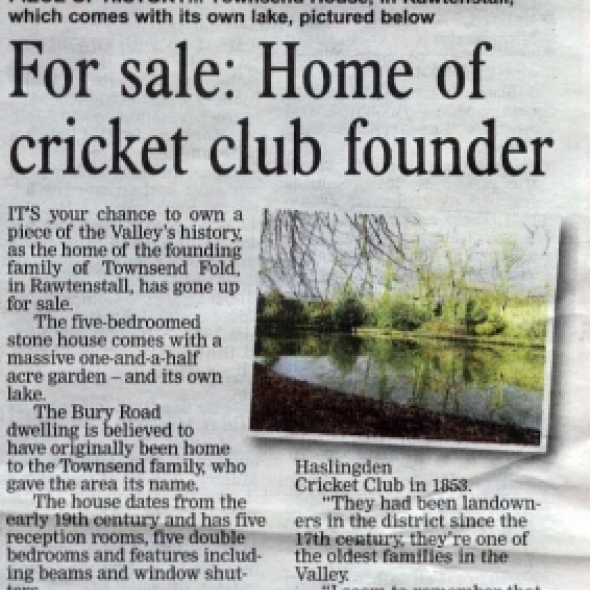 Jonathan was a church warden at St James 1817 - 1820, 1822 -1825 (there is a memeorial to the family within the church itself). He donated the 4th bell in 1830, along with his brother Richard he owned Townsedn Fold Mill. It is known that they were very much involved in starting Haslingden Cricket club in 1853.

The Holme Bridge which brings traffic over the irwell has a datestone of 1830 with Jonathan and Richard's initials on it.

The Townsend's are one of the oldest families in the valley, Jonathan's son Joshua Townsend was Master of The Holme and died in 1896, he was amember of the Rawtenstall local relief board when Pikelaw was built (was workhouse), Joshua represented the sixth generation of the family to have resided in "the Old house at Holme" with its pictureque surroundings and hallowed memories. Joshua was the eldest of old Jonathan's four sons,. He was educated by Mr Ainsworth, Sunnyside and at Mr Littlewood's school in Rochdale. For two years he was at Newbury Seminary, Vermont , USA, he sailed across the Atlantic under sail when he was 14 years of age, came back to Rawtenstall for the opening of the railway in 1846, he was then 16. After he became a cotton spinner at Townsend Mill, he retired in 1872. During the cotton panic in the 60's (cotton famine precipitated by US civil war), he was the local secretary of the relief committee, and interested himself in the alleviation of distress. There must have been a lot of that at the time. He was buried at Newchurch, according to his obituary notice ' in private, as in public life, Mr Townsend was the very acme of affability an dgeneality, his instincts being those of a true English gentleman and he wore a kindly heart'. Mr Townsend was a scion of an old family who have held land in Rossendale for over 200 years (written in 1896).

In a deed traced for Joshua Townsend (died 1828),of the Holme and for Joshua Townsend (his son and heir) in 1805 there is mention of cottages, 2 barns, a fulling mill , carding engine and outhouses, there is a good chance that the barns relate to Holme Farm (Holme Manor ) today. Deeds are at the record office in Preston.

The older part of Holme Manor is constructed from narrower courses of random stones, more roughly dressed, the walls of this building ar over two feet thick which suggests a date of the latter part of the 1700's , though the building is much altered internally, its exterior bears the hallmark of its age.

I think one of the last members of the family was a lady living at Brookfield House near The Whitchaff, Ethel Blanche, she died in 1958 aged 85. I have seen a letter written to her in 1954 thanking her for the loan of "so many of your treasures" to the summer exhibition in the Art Gallery and Museum at Whittaker Park. apparently the lovely things helped in no small way toward the exhibition being such a success.

Much of this information has come from Rawtenstall library and documents drawn up by the late John B Taylor, without whose painstaking research much would have remained a mystery.

According to Chris Spin in The Rossendale Free press (Friday 25th Feb 2011) the Townsend family had much to do with the setting up of Haslingden Cricket Club in 1853, they were great supporters and players I think at that time.

If anyone has any more information I will be pleased to receive it and to add to the site, it is a work in progress. In particular if anyone has any old photographs of Holme Farm, that would be great , I would like to copy them. Thanking you Ryan Godwin Feb 2011 Tel 07814 148328 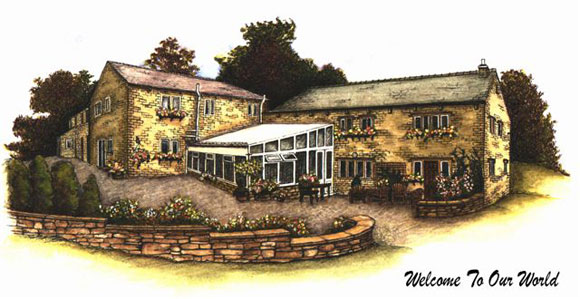